Press enter to begin your search

Is your nail biting a nightmare?

Is your nail biting a nightmare? 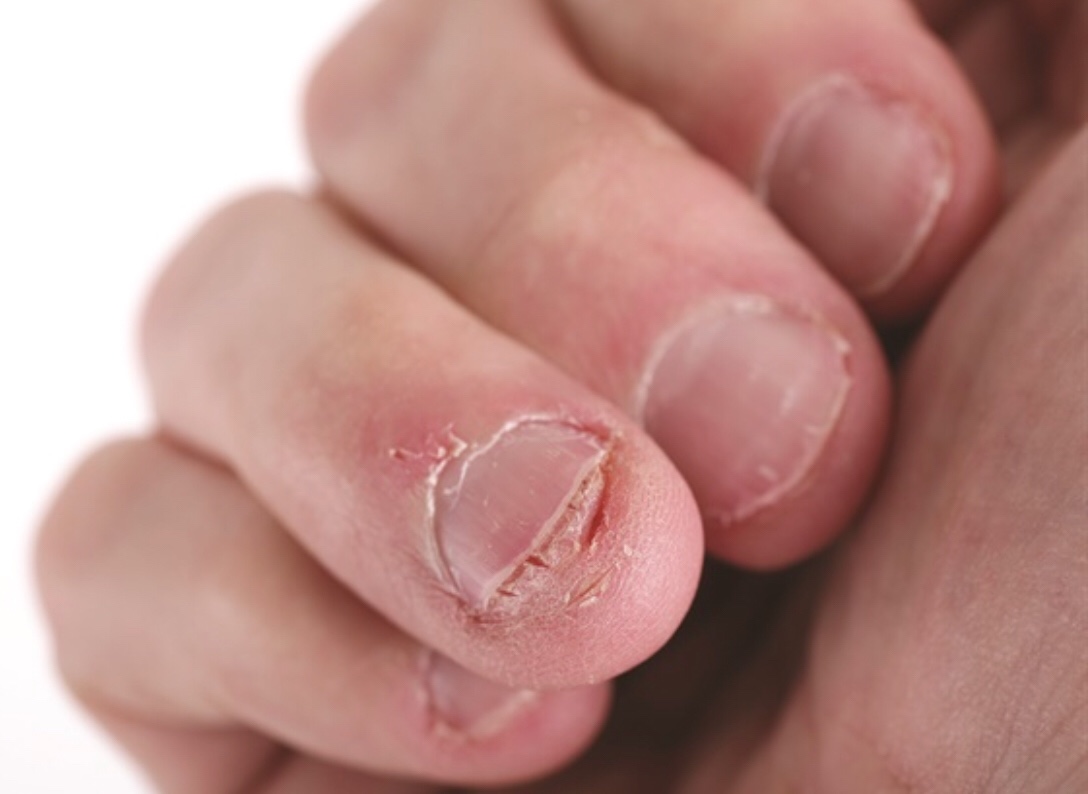 Nail biting (onychophagy) is a habit many would like to stop but a difficult one to break.

There are thousands of children and adults in the UK suffering this and according to American Psychiatric Association, nail biting is now recognised as a sub-group of OCD.

One of the first steps to quitting is recognising your trigger. Think about when you bite your nails. Is it when you’re anxious, bored, hungry or stressed? Knowing this and addressing it can be the first step to stopping.

I recently conducted some research on this subject, asking former nail biters to tell me their triggers and top tips for quitting which are listed below.

It’s a fact that due to constant stimulation, nail biters nails grow faster than non-biters so if you can keep your fingers out of your mouth long enough you’ll really notice them grow. The secret is then keeping them beautiful without eating them! According to the book ‘Psycho Cybernetics’ first published in the 1970’s, ‘it takes 21 days to break a habit’ so there’s hope!

Based on the results of my research, here are the top ways to put an end to your nail biting. 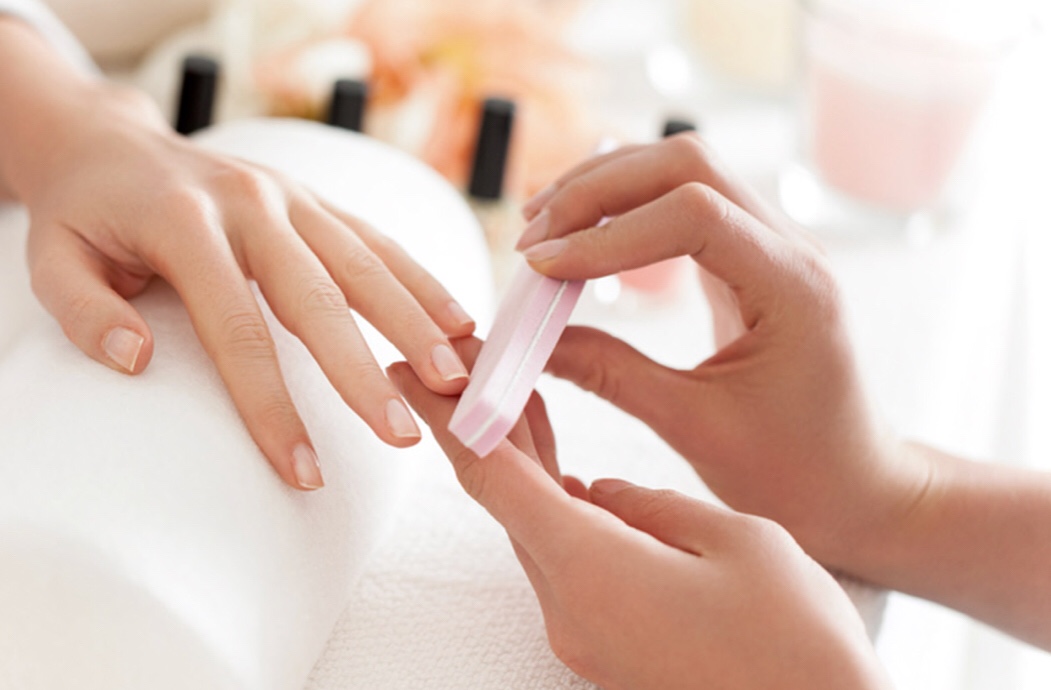 Book a manicure. A good, thorough manicure would involve tidying your nails, softening and cleaning up your cuticles, exfoliating and massaging your hands and arms and buffing your new nails to perfection. Treatments can be added to upgrade your manicure for a bespoke service. Make sure you go to a natural nail care specialist who can advise you on the best course of action and come up with a treatment plan 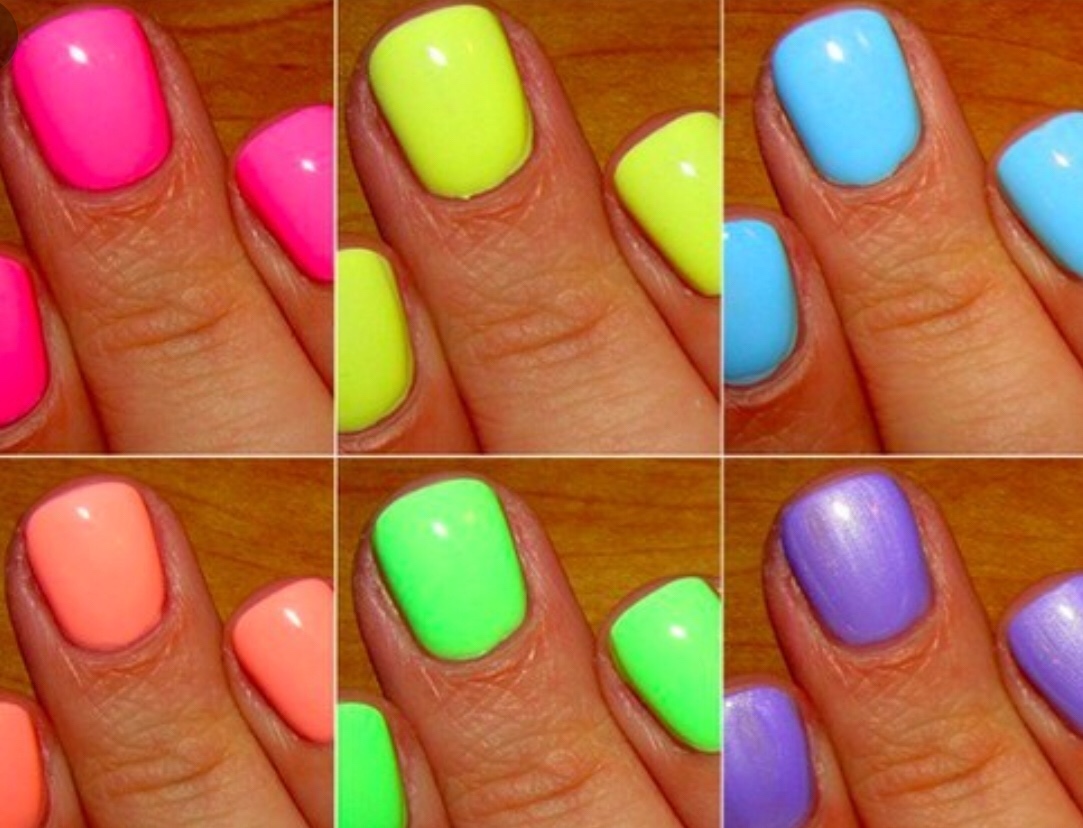 Paint them a colour Ok so they might look ridiculous at first but stay with me here! Psychologically, the brighter the colour of the nails, the less chance there is of you putting them in your mouth. 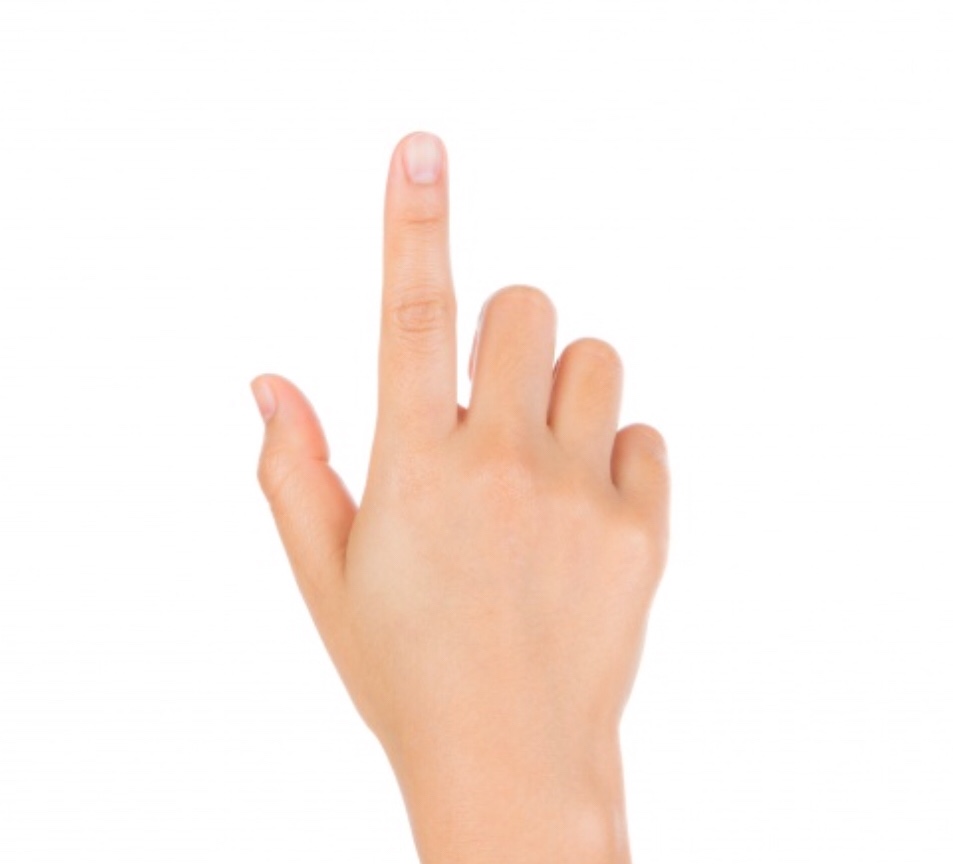 Grow one at a time if you have to. As a small child I was a nail biter. The promise of my first gold ring was the push I needed. I decided to only bite my thumb nail and eventually stopped that too. Allowing myself just 1 nail to nibble on was enough and eventually my bad habit was broken forever! 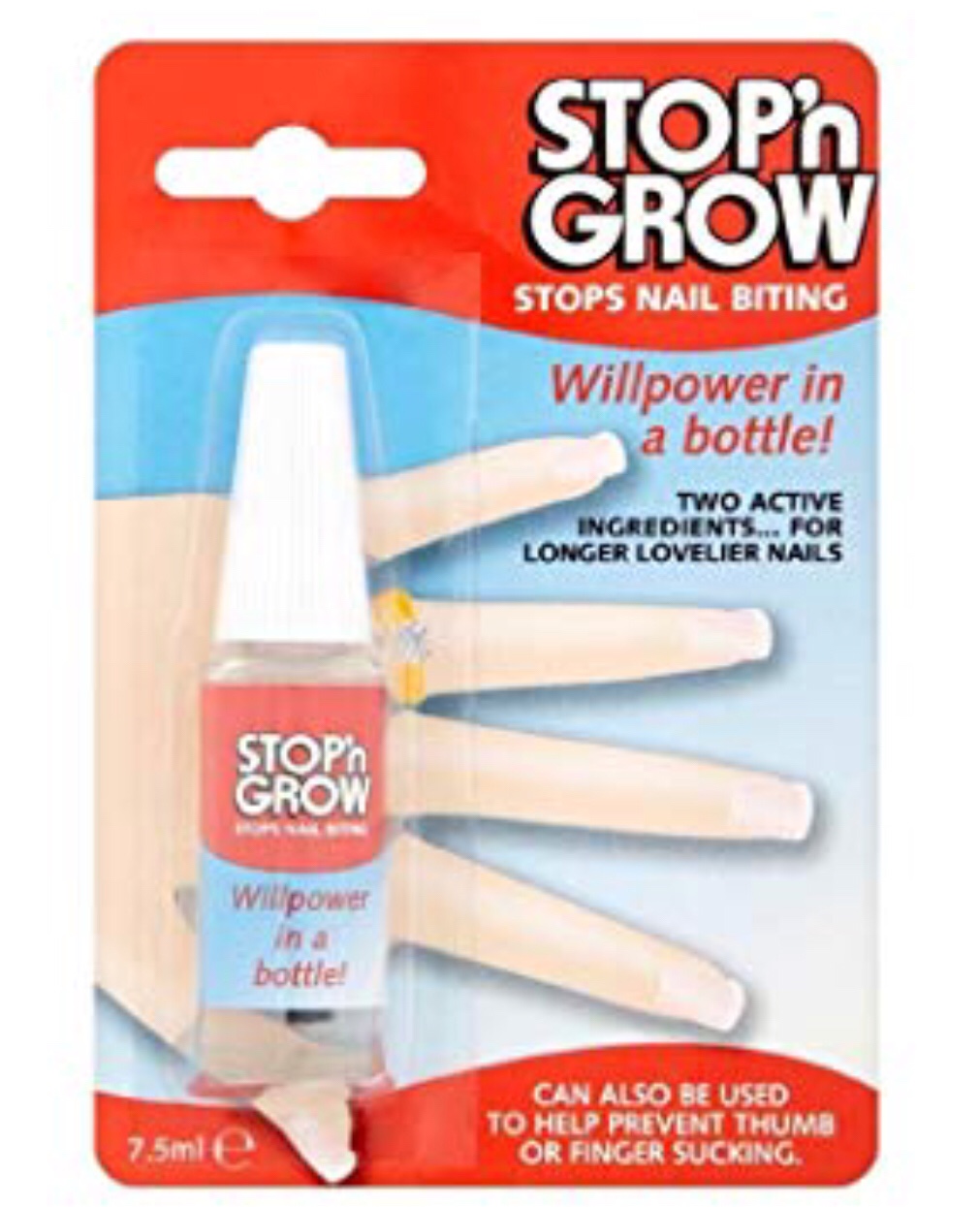 Foul tasting treatments All nail biters remember the taste of this stuff, but how many have actually tried Mustard on their nails?! Yes, mustard was mentioned several times from the contributors and it worked for them! Surely it’s worth a go? ( unless you LOVE the taste of mustard, like me!) 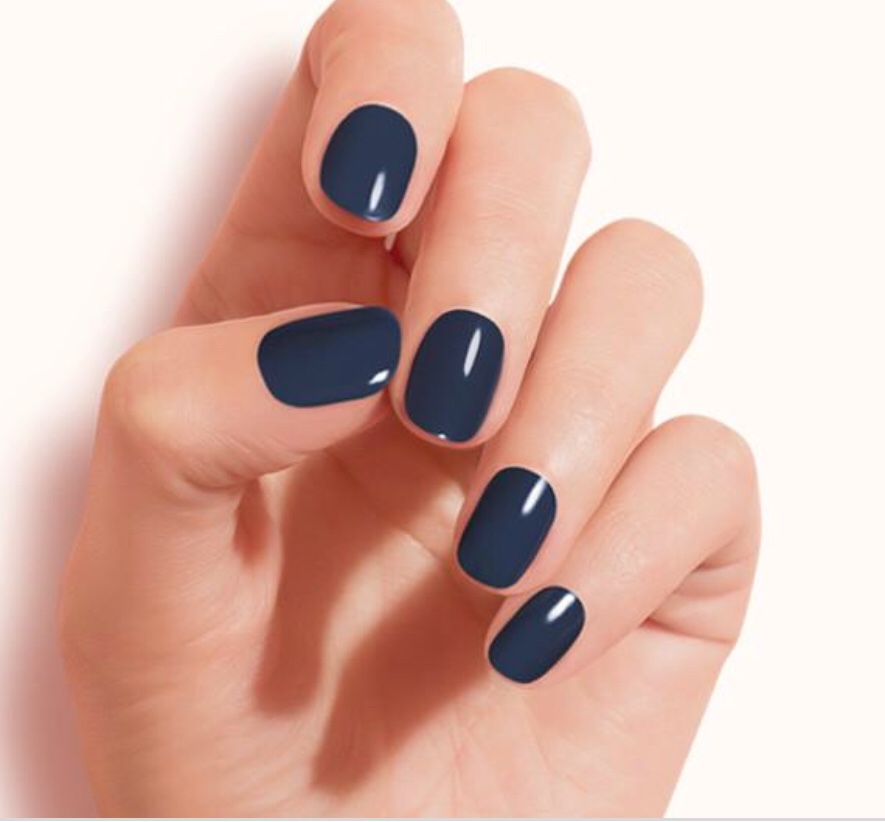 Regular gel polish/acrylic appointments While this worked for many, I would also imagine the urge to pick off your enhancements and causing horrendous damage to your nail plate) too tempting. The contributors said the ‘thickness’ of the gel polish and acrylic deterred them from biting. 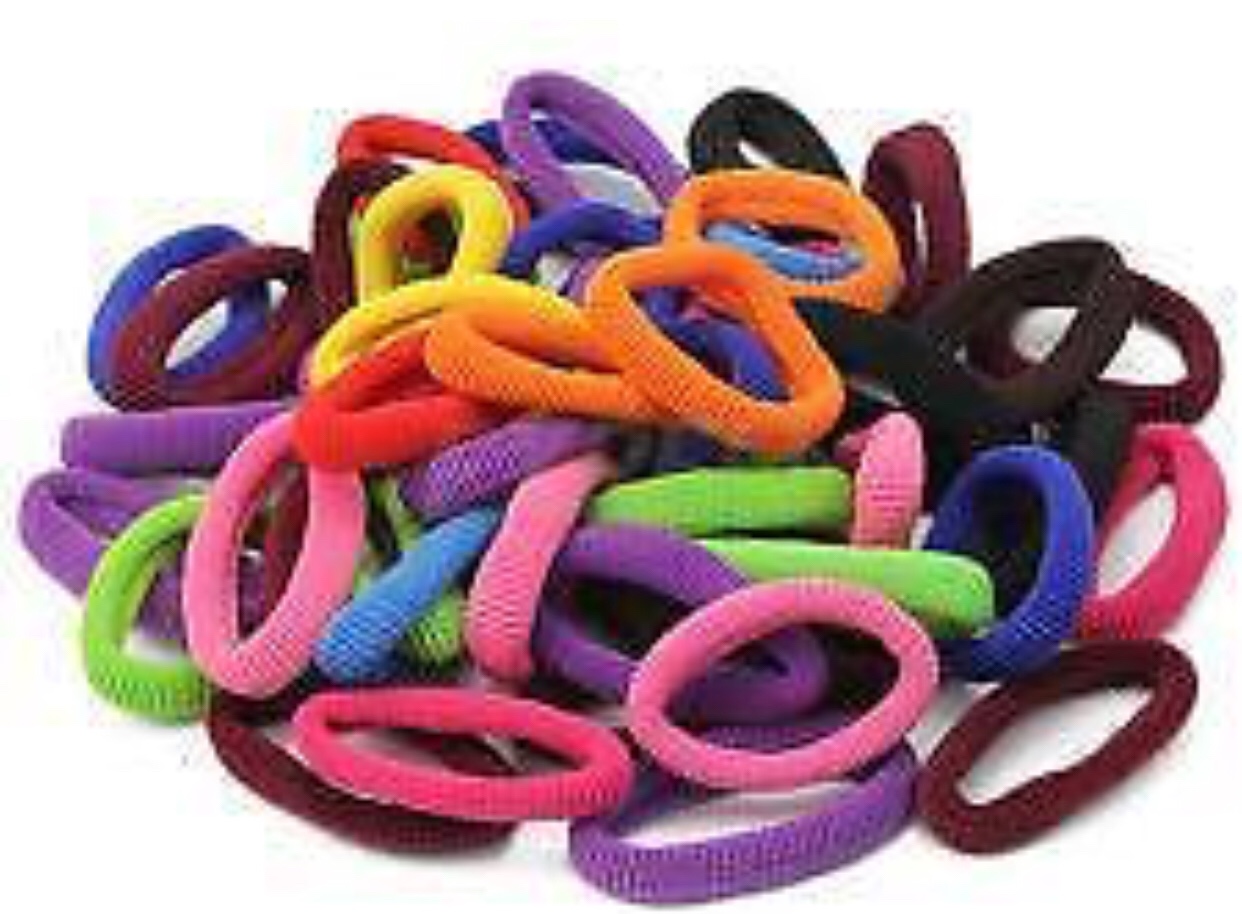 Wearing a hair band to play with was also suggested by many of the army of ex-biters. Flicking and fiddling with a hair band around their wrist was the ultimate distraction for some.

So where do you go from here? These simple suggestions are from the very people who stopped biting their nails, so take note! Try one suggestion at a time, try them all, choose 2 at a time, whatever you like but give them a go – you have nothing to lose.

And if you manage to break the habit, get in touch. I’d love to see your results!

Good luck and much love,

How to choose the perfect foundation 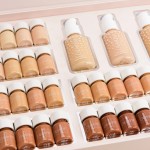 With make up sales at an all time high, it’s hardly surprising that many of us are buying products that we don’t ever use! We’re lured by clever advertising to buy the latest foundations without having the basic info we need to make the right choices. I’ve put together 5 easy steps to help you get it right…

1. Know what you want your foundation to do

Do you want to let those freckles shine bright or do you want to cover your broken veins? Foundations come in a variety of coverages and finishes. Know what you want it to do before you hit the nearest make up counter. A good consultant should be able to help with this by asking you some key questions such as ‘what sort of coverage do you like?’ There’s full coverage foundation for covering scars and birthmarks, medium coverage that you can ‘build’ and light coverage that can be ‘barely there’. Add to that the different formulations such as cream, powder, mousse and mineral and you’re forgiven for getting it wrong for so long! Decide what you want it to do and in which formulation.

Your foundation isn’t a mask. Nor should it be a different colour to your neck. It’s not your foundations job to change the colour of your face so it should blend seamlessly. If you’re having to colour your neck to match, chances are you’ve got the wrong colour. 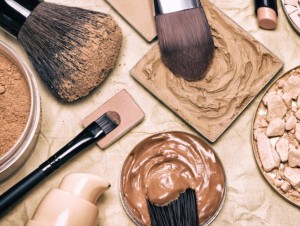 Knowing your skin tone is where most people go wrong. Have you bought foundations in the past and wondered why they just don’t look right? You thought you’d found the perfect colour only to get it home and it just looked weird! Take a really good look at your skin. You’ll have a pink undertone (cool) yellow (warm) or a mixture of both (neutral) Check out the inside of your wrists. Do your veins appear blue or green? If they look blue/purple, you’re cool-toned. If green, you’re warm-toned. If you have trouble telling, you’re probably neutral. Once you know this it can help with everything from knowing the colour of clothes, jewellery and hair colour that suit you

How many times have you got a foundation home to find it’s totally wrong? Department stores and shops often have unflattering fluorescent lighting and you might find that what looks good while you’re there doesn’t look so great when you get home! Ask the consultant to put some on you (usually on the jawline) and go to the windows if there are any. If not, ask for a sample or put some on and go outside to check. Remember, we’re trying to match it to your neck. Many high end foundations aren’t cheap so you need to know the colour is EXACTLY right before parting with your hard-earned cash. If you’re buying off the shelf, this can be even more difficult as you’re on your own!

Ok so this isn’t necessarily about foundation but I wanted to add a word about colour. Foundation alone can look flat. It’s the job of your blusher and bronzer to add colour to your face, not your foundation.

Formulations for foundations are becoming more and more sophisticated and many now have light reflectors, sun protection, moisturising properties, anti-wrinkle agents to name but a few. Go back to no.1 to decide what it is you want your foundation to do for you to help you decide.

So there you have it! A quick guide to choosing the perfect foundation. Hopefully this will help you in your buying decisions and stop you wasting your hard-earned money on products that aren’t right for you.

5 tips to grow your natural nails 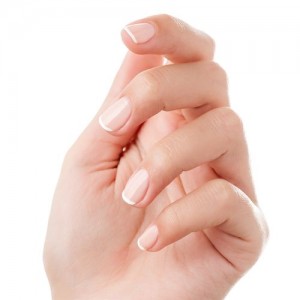 Do you wish you had beautifully groomed nails?

Your nails say so much about you! We spend so much money and time on our hair, make up and clothes but often our hands and nails are neglected. Don’t let your digits let you down. Follow these simple tips to help grow and groom your nails

And there you have it. 5 simple tips to help keep your nails groomed. Ideally you should be visiting a reputable salon for professional manicures, but these are all easy things you can do at home to do help to keep your nails strong, tidy and ready for painting.

* the true cuticle is a white substance on the nail plate that is often seen when the eponychium (that was previously thought to be cuticle) is pushed back.

© 2021 The Nail And Beauty Lounge Poulton. All Rights Reserved.